the pests develop a resistance and the chemicals have no effect on them. The farmers are unable to control disease and are at their wits’ end to put an end to this problem.

Mr. Mallikarjun bid adieu to chemical fertilisers and has grown paddy adopting  agronomic practices  under the guidance of the Samuha team and today he is the model farmer in Siddapur Hobli.  Mr. Mallikarjun (42) is one of the project paddy farmers in Eliganoor village of Siddapur Hobli in Gangavathi taluk, has been cultivating paddy in 2 acres of his land in the tail-end area of the TLBC area. As per the guidance of the Project, he adopted Laser leveling technique followed by Line planted paddy in his 1 acre area under NPM (Non-Pesticide Management) approach. He has attended the training in Farmers Field School regularly during Kharif 2015 and adopted proper Water and Nutrient management practices as per the guidance of the Project team. As a result, he had incurred just Rs.11,700 and has got 37 bag (28 qtls) from his 1 acre paddy.

This is about 32% increased yield with 54% reduced cost of cultivation compared to the conventional paddy in the village. Further, as a result of proper water management, in his 2 acre land, he had saved about 48.1 lakhs liters of water under the Project. “While most of the farmers in the village were applying synthetic pesticides to control the serious problem of Brown Plant hopper in paddy, because of alternate wetting and drying in his zero leveled field with line planting and optimum dose of fertilizers, I did not come across the problem of BPH during this season” says proudly the successful farmer. He further says that the water in his field would be normally around 4-6 inches to maintain weed under control in his unleveled field, but as result of Laser leveling season he was able to maintain uniform level of water and it was not more than 1 inch through the season. He is very happy to see his paddy has been cultivated without any synthetic chemical pesticides and there is a demand for his paddy within the village at the rate of Rs.3000/bag. Many unbelieving farmers have observed this success in the village and are interested to take up this approach in the coming khariff 2016. 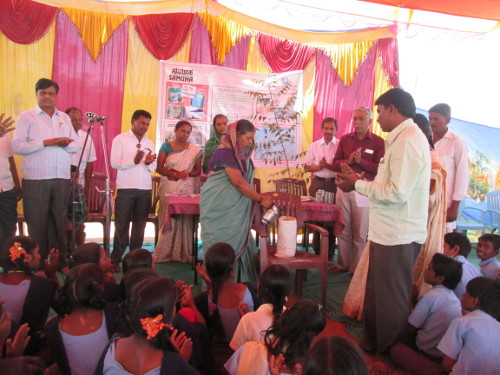